The project created a wonderful welcoming atmosphere in the church, with the  photographs, the pictures on the  digital display, music and the flowers and friendly stewards on duty, ready to talk or offer a cup of  tea or coffee if required. It conducive to reflection and talk and this was sometimes humbling, often enriching. We heard people’s often interesting stories about their lives as well as comments on the pictures in the exhibition

It seems to us that putting on exhibitions that provoke thought and conversation in this way, is something that we can do, and do well as a church.

A wide variety and cross section of people visited the exhibition, some who had family connections with the church, some who wanted somewhere quiet and who obviously wanted to talk, friends from other churches, those who had submitted photographs, or who featured in them (especially children). Some were professional; some were out of work.

Another time we could specifically invite those whose pictures are being displayed, as it turned out that not  everyone  got to hear of this until after the event (despite all the publicity!)

We estimate that the project must have reached out to at least 400 people, possibly more. More than 300 pictures were submitted and over 120 attended the launch event. It has touched to varying degrees, for example, the Tenovus choir, Coedylan primary school, all church members who attended on the two Sundays during the exhibition, the members who helped mount the exhibition, attendees of coffee morning, the guides, Merched y Wawr, Pontypridd who made it a special project, participants in Pontypridd Christians Together social evening. In addition we have 91 followers on Facebook and 82 on Twitter, GTFM listeners, and the ‘Movers and Shakers’ and ‘Positively Ponty’ networks will have heard about the project, as will students and staff at University of South Wales.

335 votes were cast for the “People’s Prize” and the winning picture was ‘Mena in the Park’ by Elin Griffiths-Warner. The Mayor has agreed to host the winner at the Mayor’s Parlour- hopefully with her family also, since Elin is a school student. 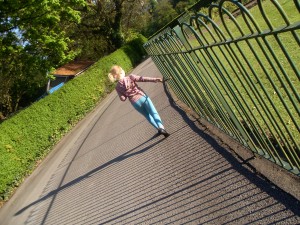 The comments on the graffiti board were all favourable; comments were made about the pictures, the quality of the event and the church building, many people who had not been inside the building before commented how attractive it is. The only slightly negative comments were made regarding an expectation that there would have been more historical photographs of Pontypridd, which of course was not necessarily the aim of the project as this has been done in the library and the Historical centre..

A very important aspect was the way in which church members worked together, using their talents and offering their time and commitment, people volunteered willingly, creating a spirit of cooperation and support for each other. Hopefully it has brought us as members closer too as we have engaged with each other in yet another way which linked with so many of our existing activities and with our ‘Bigger Vision’ for engagement  in new  and meaningful ways with the wider community.

The exhibition was a catalyst for two reflective and dynamic Sunday services, which again brought the community of our church together and reinforced our commitment to our vision/

So it is safe to say that the project has made an impact!

We have learned a few lessons – that a long lead in time is needed in order to capitalise on grant funding , and to meet their application deadlines,  that it is better to concentrate on working with the willing than on cajoling the unwilling  (schools, for example), that clear minutes are essential to avoid confusions in the planning and to allow  the widest participation (there was a confusion about agreed opening times).

We acknowledge and thank our patron, Rowan Williams for his inspiring message, Beverley for her professionalism, Wil Stewart for his expertise in graphic design, our three judges, Darren Warner, Derek Lewis and Annie Grove White, Mike and Helen O’Callaghan Williams for the wonderful buffet, Pontypridd Town Council, the URC ,PCW  and Pontyclun Community shop for financial support, Sainsbury’s for the coffee and biscuits, Vaughan for his encouragement and last but by no means least Phil Wall for his message of support, (forgiving his rugby preferences!).

The exhibition would not have been possible without the imagination and expertise of the keen photographers who took the trouble to submit their photographs.