Yea!!  We’re here and very happily so.  Incredibly warm and delightful people; gorgeous scenery; a manse cleaned and furnished with care, thoughtfulness and amazing generosity – words fall short except to say that we are genuinely blessed to have landed here. 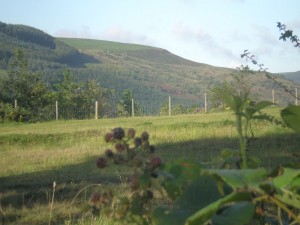 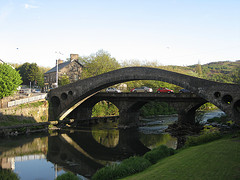 The Old Bridge (177something)﻿ 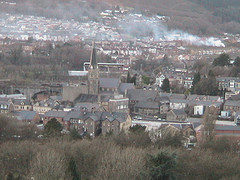 Pontypridd, Wales (taken from The Common)
﻿
Dilys Hughes was born in Pontypridd in the 1920’s.  She was raised and attended school here.  After the second World War, Dilys married Charles Maddin and they began a new life in a new home in Vancouver, Canada.  It turns out that a new church was developing up the road from their home (this was, after all, the 50’s, when a new church was opened in Canada every week).  Being relatively new to the area themselves, they jumped in with this new venture and helped get it off the ground.  As the building neared completion in 1957, the congregation needed a name.  Several suggestions were put forward, including one from Dilys.  In respect to the patron saint of her beloved Wales, she suggested this new church be called St. David’s.
I don’t know if the name seemed a good fit or if it was helped by the, shall we say, persuasive skills and enthusiasm of Dilys, but one way or the other the name St. David’s won the day and this is how a congregation in Pontypridd and in Vancouver were first connected.
Over 50 years later, this connection was entirely lost until remembered by Dilys’ daughter, who now lives in Arizona and, when she discovered I was going to serve St. David’s in Pontypridd, sent an “I can’t believe it!” e-mail.  That I should happen to be called to the same town where Dilys was born and raised and attended church, and that she would the one who brought the name to the congregation in Vancouver is more than a coincidence.  It is remarkable and makes me wonder about relationships and connections.  It makes me wonder about how God works in our life, hitching us to people who share unseen lines of connection.
When I was able to tell the congregation in Vancouver where we were going and what we’ll be doing, two people approached me and said, “We’ll be right down the road!”  Bob Burrows, a retired minister from St. David’s and a member of the Vancouver Welsh Men’s Choir was leaving to sing at the Cardiff Castle.  He had some extra time, so hired a car to take him to Pontypridd, 20 minutes away. He found St. David’s Uniting, in the center of town, took photographs, and called us from his cell phone to say, “I’m so excited for you!”
Only four days later another member of the Vancouver St. David’s congregation, Hew Gwynne, was coming to Cardiff to visit relatives.  The Sunday after Bob was here, Hew Gwynne arrived for coffee after the Sunday service.  He, too, took photographs and sent an enthusiastic e-mail. 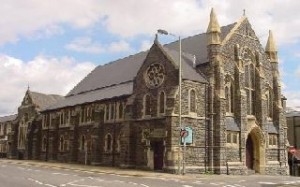 St David’s Uniting, Pontypridd﻿
What are the chances that a person born in Ponty would be a founding member of a congregation in West Vancouver who helped name the church, and 55 years later I would be called to go from this West Vancouver congregation to serve an interim position at St. David’s in Ponty, and within two weeks of informing the W. Van congregation of our whereabouts, two members would be visiting the town and the church where my family and I would soon be arriving?  Anybody good at statistics?  What are the odds?
There seems to be a bridge of connection between the two communities.  Perhaps you’ve seen this 5,000 mile bridge that spans from Pontypridd to Vancouver.  It crosses the Atlantic, rides over cities and prairies, clears the rockies and coastal mountains and lands in West Vancouver.  You may not be able to drive on this bridge or find it on Google Maps, but you can travel this distant line of connection, as several already have.
We are connected in ways unseen.
Dan Chambers