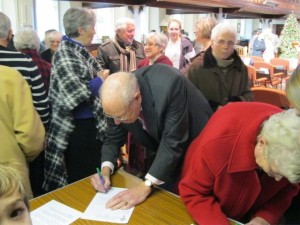 During  the service  on the first Sunday of Advent we  sang:
“Cry  ‘Freedom’ for dictators
in their fortresses confined
who hide behind their bodyguards
and fear the open mind.
and bid them find true freedom
in the good of humankind” 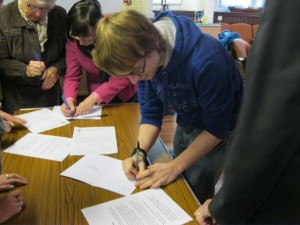 We remembered those who suffer, unjustly, in different parts of the globe:

Gao Zhisheng, a human rights lawyer, has suffered disappearance, torture, imprisonment and house arrest because of his work; the Deep Sea Settlement, a Nariobi slum, is home to around 10,000 people who live under constant threat of being evicted; Reggie Clemens is on death row in USA for a crime for which he protests his innocence, and for which the evidence is shaky; Azza Hilal Ahmad Suleiman is fighting for justice after Egyptian soldiers attacked her during a large protest in 2011. 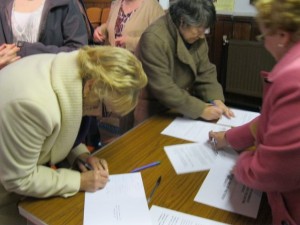 To these and others we signed  greetings cards.  Details of these  and other people who need our solidarity and our prayers  are published by Amnesty International.

There was a ‘buzz’, as people moved around church, talking, signing and reading about people and their horrendous situations. Others sat in their seats, listening to music and watching  images on powerpoint.   This, too,  is worship. 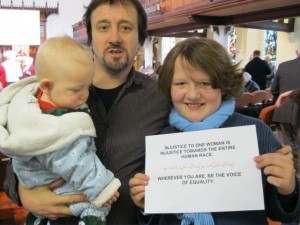 It is fitting, as we recall the violent and turbulent world into which Christ, the Prince of Peace was born, that we remember those whose human rights are violated by governments and dictators today.

In Afghanistan, a  grassroots, feminist group called Young Women for Change (YWC)  is helping women to take greater part in social and political life.  It  runs a programme of films, lectures and courses. It has led two protests asking for justice for women experience violence. It has set up an internet cafe for women and a learning centre where women teach literacy, language and vocational skills.  YWC has both men and women volunteers.

As suggested by Amnesty International, we  expressed our solidarity with  YWC by uploading photographs of  the congregation and of individuals and family groups, holding  this message:
‘Injustice to  one woman is injustice to the entire human race.
Wherever you are, be the voice of equality.’ 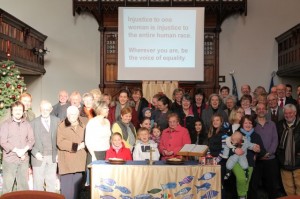 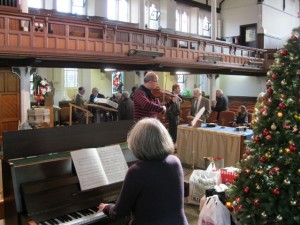