One Church Uniting in Wales?  That was the vision put before a gathering  of some hundreds of representatives of URC, Baptist, Presbyterian, Methodist and (Church in Wales) Anglican churches in Aberystwyth  on Saturday.

The vision was shared in many ways, incuding  a drama which showed us how One Church  split into many denominations over 2000 years,  each with its own particuar emphasis.  Squabbling between churches  took on comic proportions before our eyes.  Interspersed with some of the Church’s  best loved traditional hymns, like ‘The churches one Foundation is  Jesus Christ our Lord’ it highighted the anomaly of our divided reality. 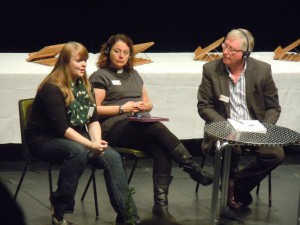 Bethan,pictured here (left), took part in a panel discussion chaired by  Phil George  (Broadcaster and member of Canton Uniting Church) along with  Delyth and Trystan, Chaplains  at the University of Cardiff.

To my mind this  was a vital part of the day,  and perhaps  the riskiest part,  involving unscripted conversation about the ways in which young people experience church and what might be done to reach them more effectively   (Cardiff chaplains wear chaplaincy hoodies, rather than dog collars!)

Most of the day otherwise comprised presentations of one kind or another –  although there was plenty of chatter in the pauses between sessions as people responded informally to what they heard and saw. 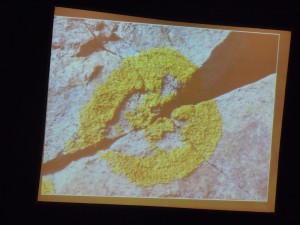 This was an image from the day that  will remain with me. It’s a picture of lichen, growing in concentric circles on a rock with a huge gap in it.   The Rev Dr Olav FykseTveit, General Secretary of the World Council of Churches, introduced this as a  picture of church unity… growing and spreading,  creating a wholeness despite the  obvious chasms!

Communion was  co-celebrated by  five leaders  from the five covenanted denominations, with Rev Simon Walking representing the URC, Rev Dafydd Andrew Jones on behalf og the presbyterian Church of Wales and the Rev. John Garland for the covenanting Baptist churches.   A new, bilingual communion service was used, copies of this were made available to delegates for use in their own churches. 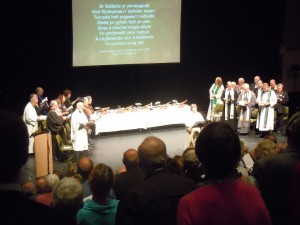 Lots of discussions will be taking place at local and national levels, to see if the idea of  a church Uniting in Wales is one that can take root.  Watch out for further blogs on the matter, once I have  studied the  pack of  recommendations and  discussion papers in more detail.

The drama, the order of service for communion and discussion doucments can all be downloaded from the dedicated website for  the Gathering .