Note by Iestyn Henson: This is not a ‘nativity play’ as such, but just a series of thoughts and comments from some of the people involved which might also be adapted to a more dramatic presentation.  It does not need to be memorised at all but does need to be read as if ‘telling a story’ or ‘sharing thoughts’. 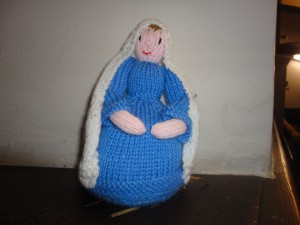 I’m worried.  You probably know why, you’ve probably heard that I’m expecting a baby.  And if you’ve listened to the local gossip, you’ll know that Joseph and I are only just engaged, that is, well, you know……..   Oh I don’t blame you for listening to the gossip, I can be a bit like that myself, and I certainly worry about what others think – all the time.  I try not to, but it’s human nature isn’t it?

Will he be special? yes, yes, I know, everyone’s child is special, and Jesus won’t be any different, but God has told me that I’m to be the mother of the Saviour, how am I going to cope with that?

I know that the Messiah is going to come and change things, but being his family is going to be tough too I suppose.  I think about him all the time, and how this little baby is going to make a difference.  Usually babies only change things for the immediate family, but this one…. oh I don’t know what to think.  I just worry….

And then, like all first time mothers, I’m worried about actually having a baby – it seems such a dangerous thing, dangerous for both of us.  I’ve not got much clue about these things, if I’m honest about it.

But there’s also been some other bad news – it looks as though Joseph and I are going to have to travel south to Bethlehem for this count of the people or whatever it is the Romans have planned.  We have no idea where we are going to stay, none at all, and Joseph’s family aren’t exactly thrilled about any of this…. 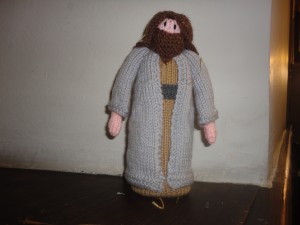 Hi, I’m Joseph, and I’m sure you’ll understand that I’m worried too.

Up until very recently, everything was going so well.  I’m a young man, finished my apprenticeship as a carpenter, setting up my own small business with help from my father, who had also helped in finding me Mary to marry.

And then, first we find out Mary’s expecting a baby, and all hell breaks loose.  First, everyone is saying ‘you’ve got to dump her’; next, I’m told this is going to be a very special baby, and that I should be standing by her, even though her family had already taken her off to stay with a cousin.  And so we ended up getting married quietly and in almost complete secrecy.  Can you have a forced marriage between two people who are committed to each other anyway?  That’s what it felt like.

And now, this, I’m told that I’ve got to travel down to Bethlehem to join distant relatives for this Roman count.  Except joining the relatives is not allowed, because they don’t want to see us because of the shame.  You’ll understand just how worrying this is.

There are lots of problems – the journey itself is the first, although not for my part, for Mary’s.  We’ll take a donkey or a mule, but we’ll not be able to carry much in the way of belongings.   And then there’s where to stay, on the way and when we get there.  We’ve not got much money to pay for our keep, but it’s likely to be attitude that’s the main worry.  I know what people are like, quick to judge according to appearance, quick to make assumptions, and very reluctant to involve themselves in other people’s problems.

Most of all, they will judge us, and our families.  I can hear it now “she should be at home with the women” and “that young man doesn’t know what he’s doing” and “the baby won’t stand a chance if it’s born on the journey”.

People will just want to find fault.  Instead of offering help and sympathetic concern, they will want to find blame, and stay out of it, in case they get blamed themselves.  It worries me silly.

(Ben to introduce ‘The Angel Gabriel’)

Hello everyone, I’m Mary and Joseph’s very worried donkey.  “A talking donkey?” I hear you say? Well you’d better believe it.  Those of you who have pet cats and dogs know that they communicate with you all the time, so don’t think that this donkey don’t know how to make her feelings known!!

Yes, yes, you can giggle, I know what you humans are like, happy to put upon your animals, and if that’s not bad enough, laugh and poke fun at us all the same.  But you sometimes forget just how much responsibility you give us, just how much you expect us to bear the load and to keep the sure foot as we travel life’s journey.

Well this Donkey is worried, so let me tell you about it.  I’m worried because the rumours about the 80 mile trip to Bethlehem have been confirmed; that’s four days solid work absolute minimum and more likely 6 days, even if things go well.  I mean, I don’t mind a walk, it’s better than hanging around in the yard and being bored.  But 80 miles?  At this time of year?  No thank you!

And I’m worried because Mary is expecting a baby, and that makes the journey all the more difficult.  And just to be clear, it’s not like we’ve got a few months to go, when I say ‘expecting’ I do mean that this baby could be born any day now.  It really makes this journey very dangerous indeed; a young girl like that should be at home, cared for by the women of the village, as they always have been – everyone knows that!

I do hope that Joseph treats me kindly on the journey, with plenty of water, food and rest.  I don’t suppose you’ll ever know for sure – it’s not as though the part I have to play is likely to be remembered is it?

Talk about busy – oh, hello, I’m the Innkeeper, Bethan by name, but that’s just about the only thing I’m not worrying about at the moment.  The Romans have made this census thing a little bit of a nightmare to be honest, all these people travelling to their ancestral home of Bethlehem.  Don’t get me wrong, I love the business, but I bet half this lot aren’t really descendants of David, they just think they are, for the sake of the family name and prestige.

I’m worried that we’ve not got enough food to feed them all – and really, that would be an unforgivable sin for any self-respecting host, let alone one who keeps a bed and breakfast for a living.  And I’m a little worried too that the tax collector will find out that I’ve put my prices up by a few shekels – well, everyone else was doing it, and you’ve got to make hay haven’t you?  I feel awful about it though – really awful, because this isn’t exactly four star accommodation, if you know what I mean.

Well, there’s one couple who certainly does – and it’s poor Mary that I worry about most.  They arrived so late this evening that I had to put them in the animal house, even though she is expecting a child any day now.  Poor thing, she looked exhausted from the journey south.  It’s warm enough out there at the moment, and the animals will help to keep them warm tonight, but what a disgusting place to have to wait for a child to be born – if indeed it comes this evening or whenever.

What on earth will people think of me?  Perhaps I’ve not go much reputation to lose though…..

(Bethan to introduce ‘Born in the night’) 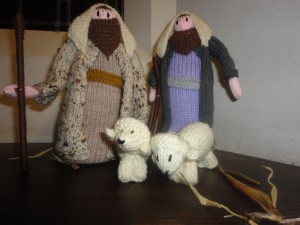 Lucy: Is there anything we should be worried about tonight?

Tom: I’m worried about the lamb who isn’t eating properly

Lucy: I’m worried about my clothes, they are getting very old and tattered now, and I look a real state!

Isobel: I’m worried about all the visitors in town and the market is running out of food; we never have enough to eat

Lucy: Has anyone heard the wolf tonight?

Lucy: These are things that we worry about all the time.  It’s a difficult job being a shepherd, and it’s not very often that people will come and say thank you.  But we’ll just do our best to look after the sheep, to stay warm, and to find enough to feed ourselves too.

Tom: What’s that bright light over there? 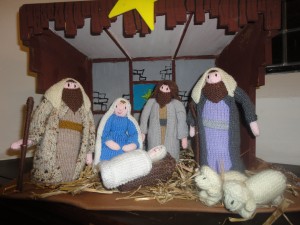 Shepherds with Mary, Joseph and the baby

Ellie: Don’t be afraid, we’ve got some good news!

Maisie: A baby has been born in Bethlehem who is going to change the world

Ellie: Give thanks to God!

Maisie: And Peace to you all!

Lucy : Wow, this is great news, let’s go to Bethlehem and find out some more!

Rhiannon: But I haven’t got anything to wear

Tom: And we look so dirty and scruffy

Lucy: As usual!  But what can we take as a present?

Isobel: We’ve got nothing at all, unless we take some wool, or some milk for the mother and father.

Lucy: The Angel told us not to be afraid, not to worry, so let’s gather the flock together, and we’ll take it in turns to go and visit the baby.  We’ll take some wool and some milk, and bring the little lamb with us, because he’ll make the baby laugh.  But let’s remember to say thank you to God as well, because this is a very important day!