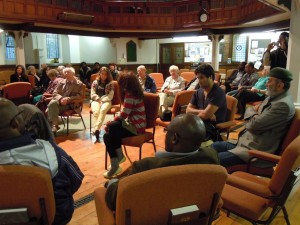 We were delighted to be approached by Refugee Voice Wales to host this year’s Refugee Week celebration at St David’s Uniting Church.

The aim was to enable refugees to meet with people from the valleys and to  have two way conversation, sharing life experiences  and raising awareness of the everyday issues facing refugees.

So a significant part of the evening was spent in small groups including both refugees and local people, then sharing together some highlights of our conversations.   We heard, for example, a humorous tale about an escape from Iran in the back of  a refrigerated lorry, and more more sober account of being deported from Gatwick, only to be called off the 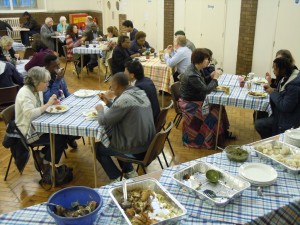 plane in a final reprieve… but with still no final decision on the application for asylum.

Someone commented  ” I can’t believe  that after such awful experiences, the refugees I spoke to were still smiling”.
And someone learned an important lesson: ” When people ask me ‘where do you come from?’ now I know that it is not some kind of racist comment, but a Welsh tradition –  the first question that everyone asks!”

In small groups and in one to one conversations over supper many, many more stories, and laughter, were shared. 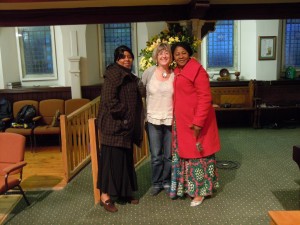