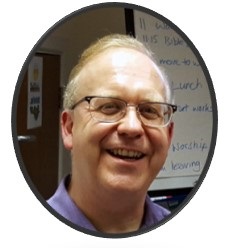 This week I’ve had toothache. I’m not looking for sympathy, although it is one reason why the written reflections were late for some people this week. It’s really a way of introducing our theme. I have quite a small crack down a medium size tooth, but when I drink anything hot, or bite on it gently, you have to scrape me off the ceiling. The pain spreads across my face and over my head. It drained my concentration and the subsequent swelling along my jaw line and antibiotics seem to affect my whole body. A little thing, having a big effect. And in this case a negative one. Our reflections today pick up on Jesus talking about little things with a big impact. And the readings are suitably short, so don’t go anywhere or you’ll miss what Cerys is going to read for us.

There we have it, simple and straightforward: little seed, big tree, home for all the birds. Little yeast, big dough, lots of people fed. Small things can have a big impact. ‘Great oaks from little acorns grow’, ‘Bach yw hedyn pob mawredd’. Proverbial wisdom about doing the little things, patience, and keeping going. And Jesus says that the Kingdom of Heaven is like this. Matthew reveals his Jewish roots by being sensitive to speaking or writing the name of God, even though he’s been around Jesus who calls God ‘Dad’. God’s Kingdom is like the mustard seed growing to be home to the birds of the air, perhaps a reference to people of all nations. God’s Kingdom is like yeast making the whole dough rise: small active cells of God’s people transforming the world. That’s good news for us, it means that however small or unimportant we feel, we can still be part of God’s work in the world. However, little we think we can do, God can use it to make a difference. But there is also challenge, God’s Kingdom is not just for us and ours, it is to welcome everyone, to change everything.

Now despite the mustard seed being a favourite parable in our house, I want to knead the parable of the yeast a bit today. That’s not just because my dad grew up in a bakers’ shop. We remember a family trip to St Fagans when we lost Dad for a minute, and he was round the back of the bakehouse warming himself against the wall – he said, ‘This is the best place on a cold day!’ Besides, this parable isn’t about a baker although there is huge amount of flour involved – enough to make 50 or 100 loaves, enough for a feast! Jesus says God’s Kingdom is like yeast a woman took… it’s a domestic scene, perhaps in the courtyard of the house, in contrast to the stories in the fields we’ve had over the past couple of weeks. Before we move on, how many parables can you think of where a woman is the main character? I can only think of three: the one where a woman pesters a corrupt judge for justice; the one where a woman celebrates when she finds a lost silver coin; and this one. That’s significant when we think about how the ones without power do not always see themselves represented as the central characters in stories, tv series and films. Black people are often in supporting roles. Disabled actors are often restricted to playing the role of disabled people. Women are stereotyped. Dismantling our view of who is important and what is normal depends on those who often feel excluded being represented in public life and culture.

The United Reformed Church Wales Synod is in the middle of a project funded by the Council for World Mission called ‘More Able Church’ we are trying to find ways of helping us all to realise that people with different abilities all have something to contribute, and that the people we label as disabled are more often than not dis-abled by the environment that isn’t suited to their needs or the attitudes of others who don’t see their potential.

Some of the thinking arising from the Black Lives Matter movement has been around seeing how having white people front and centre all the time creates a sense of privilege. Then it’s not enough for us personally not to be racist, we need to be actively anti-racist, dismantling the inequalities which favour us if we do nothing. That can begin with becoming more aware of the inbuilt bias we have, and by listening to the experience of black people. Perhaps watching ‘Anthony’ a BBC drama imaging the life that might have been lived had it not been cut short by a racist murder.

That may seem a long way from Jesus saying, God’s Kingdom is like yeast that a woman took… but that in itself is a sign that Jesus welcomed women into his teaching circle. Although women were excluded from lots of religious activity, Mary of Bethany sat at his feet and Mary Magdalene called him ‘Rabbouni’, teacher.

So, the first twist is to note the woman as the one who starts the action, bringing the yeast and flour together.

The second twist is to note this parable is about leavened bread. The bread offered in the temple was unleavened bread. Each year after celebrating the Passover as their formation as God’s people, the feast of unleavened bread would be celebrated when all the old yeast and dough starters were cleared out of the house as part of the cleansing and renewal to be God’s people. We might think of beautiful bloomer or a wholesome wholemeal when we think of a communion loaf, but for Jesus hearers, holy bread was unleavened. Not only that, but elsewhere in the gospel Jesus variously warns the disciples against the leaven of the pharisees, the Sadducees and Herod; their teaching and their hypocrisy. When Paul uses the image of leaven in his letters to the Corinthians and Galatians it’s in a negative sense, he says, ‘don’t you know a little yeast leavens the whole batch of dough?’ but he means it in the sense of ‘one bad apple spoils the whole barrel’, which is a proverb quoted by Chaucer in the Canterbury Tales.

In our recent experience we have seen how a microscopic virus can impact a body and infect the world.

So, the second twist is that Jesus takes a proverbially negative image and says, ‘God’s Kingdom is like yeast that a woman took and hid in three measures of flour.’ A challenge perhaps to review our understanding of the outcast and the sinner and re-cast them as part of God’s plan.

There’s a third detail to note. It’s perhaps not a twist, but maybe a clue. Some translations say the Kingdom is like yeast a woman took and mixed with three measures of flour, other translations follow the original Greek and say, ‘like yeast a woman took and hid in three measures of flour’. The idea that the leaven is hidden in the dough working secretly has resonance with the parable of the seed growing secretly. It also picks up on Jesus saying that the good things we do for others in secret will be seen by God. Maybe that’s good news for us too, that the yeast does it’s work without it being obvious, but the overall effect is that the whole batch is leavened. If we act in faith, doing what we can in the midst of the current restrictions within our limitations as people, then God will use what we do to build his Kingdom.

I can imagine that half of Jesus audience were not interested in picking over the words. Their arms were hurting at the thought of kneading three measures of dough, enough to feed a hundred people, enough for a feast, a celebration. The Kingdom is like yeast that leavens the whole; not just enough for the woman herself, but enough for the village. Bread that takes away hunger and brings joy.

That could be a place to end. But that only really re-tells the parable, with a few hints of actions along the way. How then do we translate this from something we hear to something we do? To make it good news about God’s Kingdom for all people?

We might discuss who’s who in the parable. Are we the woman, or is that God? Are we the flour, with God as the yeast working in us? Or are we the yeast, with our actions making the difference to our community and world? Let’s knock that back and reshape the question in to how does God’s will get known and done on earth? Already you’ll hear echoes of the Lord’s prayer:

‘Thy Kingdom come, thy will be done,
on earth as it is in heaven.’

Which turns us back to Jesus as showing us an embodiment of God’s will, and to prayer as a way of searching what God’s will is for us today. As we search for God’s will, God is also searching us, helping us to find the way. Cerys has another couple of verses for us:

I find something immensely comforting about the Spirit making connections with sighs too deep for words. Whether it’s moaning with toothache, or an irritated noise that escapes when thinking about a past regret, or sighing about how long the current restrictions need to last, it is comforting to me that we don’t always have to find the words, that God can turn sighs and half-formed thoughts and feelings into prayer. That helps too in times of grief and longing, of anger and frustration. The same Spirit that taps into our inner lives, connects us together in fellowship and equips us to be God’s people in our daily living.

Living Lord, who used the ordinary things of life
to share the good news of God’s love and care,
encourage and inspire us to do the same.

May we support our friends and neighbours through these challenging times,
by chats on the phone and over the garden wall.

May we open our hearts to the needs of others
and be willing to be part of the answer to prayers.

We remember all those who are grieving
and ask that they may be comforted.

We pray for those who are in hospital or facing treatment
and ask that they may experience your healing touch,
and we give thanks for all who care in hospitals, care homes and in our homes.

We pray for those whose mental health has been affected by lockdown and
those adjusting to the new changes and ask that they may find peace and hope.

We pray for those coping with the pandemic
in impossible situations like the refugee camps in Yemen.

We give thanks for the opportunities to be reunited
with family and friends in our homes and gardens,
in parks and playgrounds.

For the wonders of creation and creativity
which remind us of your sustaining caring presence,
we give you thanks.

Our Father, who art in heaven, hallowed by thy name.
Thy Kingdom come, thy will be done, on earth as it is in heaven.
Give us this day our daily bread.
And forgive us our trespasses,
as we forgive those who trespass against us.
And lead us not into temptation, but deliver us from evil.
For thine is the Kingdom, the power and the glory,
For ever and ever, Amen.