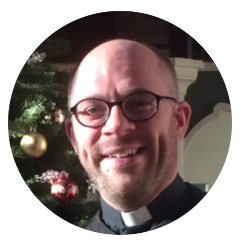 On the third Sunday in Advent our Service was co led by our Minister Rev Dr Phil Wall and Rev Dr Matthew Prevett.

Matthew was a contemporary of Phil’s at Westminster College, Cambridge and now works as a Trust Secretary for the United Reformed Church’s Yorkshire Synod.

The theme of the service was ‘There’s something about Mary’

My soul magnifies the Lord
and I dance with God who liberates me,
for she has remembered with love
the whispered song of her shadow.
Surely, from now on my story will be
handed down to all generations.
For the One who is Love
has cradled my life in her arms
and beautiful is her name.
Her tenderness enfolds our brokenness
through all generations.

Her voice clamours in shouts of justice,
wrenching free the grip of the abuser.
She gathers the abused to her breast,
her milk nurturing those who seek her
according to the promise given to our grandmothers,
to Sarah and Hagar
and their children forever.

Reflection – There’s something about Mary.

I’d like to share some thoughts on that reading we had from Luke’s gospel – where Mary, the expectant mother of ‘God’s promise to the world’, sings of her rejoicing in all that God has done for her. Her song, known as the Magnificat, speaks of the God who is part of her life, not in a distant and remote way, but in a way that is so inextricably linked to the life she leads. The incarnation of God in the womb of a young woman, not in the royal households of Israel, is a humbling and questioning experience – one which Mary seeks to understand. In her song I think she touches on three areas which I would like to spend a few minutes exploring and reflecting on what we might be able to learn from Mary. Working backwards through the Magnificat these three are: Remembrance, Righteousness, and Rejoicing.

Mary recalls and remembers the promise of God to Abraham and his descendants. When we think of the covenants of the Hebrew bible, we think of the ways in which God speaks to people in all manner of situations – as the floods recede after 40 days of water (perhaps something we can relate to at the moment), or as the morning dew that feeds the people, or as the pillar of fire that leads people into a new land. God speaks to people in promises that things will be better – that what comes will not compare to what has been. Remember all the times before, Mary says, when things have been bad, and yet God has promised and God’s love has remained with us. Through all, and in all, God’s steadfast love has endured. God has not abandoned God’s people whatever the challenging situation the people (often by their own collective choosing) have found themselves.

In the week after a General Election, it might not be a bad thing to remember as Mary does. Regardless of politics, it’s clear that our country is in troubling times with much uncertainty ahead. We may find ourselves in the pits of despair, wondering when the floods will recede, when the captivity will end, when God’s people will be led out of the wilderness. But we remember the promise of God to all God’s people through the ages – that God’s steadfast love endures and that we live in the promise of God. God does not abandon us or leave us – even in our most dark and troubled times – but God’s love remains with us, that we may remember what it is to be the assured people of God, living in the hope of what God has promised. The Land of Milk and Honey might be too much to ask, but at least God offers hope – however distant that may seem.

The second area Mary reminds us of is Righteousness – the topic of justice. She speaks of the way in which God’s power plays out in the lives of the weak – the young David beating Goliath, the infant Samuel, even the young Mary herself – who transform weakness into strength and turn their poverty into richness. In the Magnificat Mary says: “God has brought down the powerful from their thrones, and lifted up the lowly; God has filled the hungry with good things, and sent the rich away empty” and yet these words echo the words heard in Jesus’ ministry as he shares in the Beatitudes – Blessed are the meek for they will inherit the earth. We hear in Mary’s words a manifesto of what Jesus came later to assert – that the weakest and the poorest in society will be given the power and the wealth to participate – both in this life, but also in the kingdom to come. Justice – even in the most unjust of places – is to be celebrated and affirmed.

Our challenge in living out Mary’s call to justice is the hypocrisy of humanity. We find it easy to blame others for injustices in the world, and do scant little to make a change. There are, of course, many people who are battling injustice, who work tirelessly to help the homeless or refugees, who serve in Foodbanks or as Street Pastors, who collect for Christian Aid or who give to charitable causes that bring about change. Each of these are important and significant contributions to help the people most painfully affected by the wrongs of others. And yet, more always needs to be done, and more needs to be done to affect real and significant change not just to individuals but to systems and processes, to powers and dominions: those who dodge questions of genocide and those who fail in their duty of care to those seeking asylum after being displaced by wars those same powers have begun.

It would be impossible for us, a few dozen gathered this morning, to take on the systems that inflict most injustice and win – at least not on our own. Yet we can proclaim that God provides a system of justice that speaks of the weak becoming strong, and the hungry being fed. We can share the good news that God’s story is one of raising the underdog, turning around weakness and making it into strength.

The third area that Mary offers is that of rejoicing. Mary opens the Magnificat with expectant rejoicing, for she has been transformed from a lowly servant into one who will be called blessed. And who would blame her. As a Jewish woman, probably of modest means, she will have been part of a tradition that knew that God would come – the Prophets had certainly written of it – and yet this should have come to a royal line, the King of Kings would surely be born in a palace. And yet, this young girl, probably in her mid-teenage years, was where God’s gift to the world was placed. Not to a special Queen, but to a lowly girl. In choosing Mary, God makes it known that the coming of God as a gift to the world will not be like everyone expects – instead, it will turn lives – like temple tables – upside down. How special Mary must have felt to be the one called into this service.

We too easily find we can skip the rejoicing about what God is doing in our lives – in the lives of our communities, our churches, our families or ourselves (although it’s great that you do that each week in worship). We as a people find it easier to grumble about the things that are not going so well, and the ways our lives are not so good. Any yet Mary’s song places God’s magnificent action right in the forefront of what she wants to get across. It is not a song of despair and anxiety about the travelling she will have to do, and the cost of getting him trained up as a rabbi, and the challenges she will face by being the mother of a celebrity. Instead, she is rejoicing at how great God’s action is that she has received the favour of God who provides not just once, but through all ages.

And that brings us full circle through the song of Mary – from the steadfast love of God, the justice of God, and the action of God – those themes of: Remembrance, Righteousness and Rejoicing. Mary tells us that we too are favoured – we as lowly servants of God, as justice proclaiming people, as people who know of God’s steadfast promise and love. Our faith teaches us that these are the tenets of what it means to be disciples – to love God, to proclaim God, and to respond to God – and on this third Sunday of Advent we cannot have a greater mentor than Mary through whose example we journey to the manger and the presence of the incarnate God. Amen