George Santayana, Spanish philosopher, poet and novelist is best known by many as the man who said, “Those who cannot remember the past are condemned to repeat it.” It’s a quote ironically often mis-remembered yet one which can be found in history departments up and down the country as a reminder of the importance of their field of study. Within the church, of course, the accepted importance of looking to our past in order to make sense of our present in a thread woven into our very fabric as our scriptures and sacraments, songs and seasons recreate God’s relationship with the cosmos from our very origins to the present day and beyond. This is perhaps most apparent next month as within a space of a fortnight, we hold feast days for the saints and all souls gone before us; as – with a sense of ecumenical embarrassment – we light sparklers and ‘remember, remember the fifth of November’; and as we look back to the storms of the past and the darkening clouds of today on our Remembrance Sunday.

This year, Remembrance Sunday falls on the weekend when many will be commemorating the thirtieth anniversary of the fall of the Berlin Wall, and the Church’s part in this world-changing event. Well, it would seem that in our present context of a Government in chaos, political hostility at home and a strained relationship with many of our foreign friends, remembering the pain that suspicion of diversity can bring when wielded by power-hungry narcissists is greatly needed right now. And like Peter Bowker, writer of the new BBC war drama ‘World on Fire’ who stated that his aim is to tell the hidden human stories within the big historical events we think we know, I believe that hearing the stories of ordinary people caught in extraordinary circumstances is an important way of remembering the past so let me introduce you, or perhaps reacquaint you, to Osman Kalin, a construction worker from Yozgat in central Turkey.

Like many young Turks in the 1960s, Osman emigrated to Northern Europe, settling in the neighbourhood that stands on the border of Mitte, formerly East Berlin, and Kreuzberg, formerly West Berlin, in 1980. At the time, of course, the concrete posts, barbed wire and watch-towers of the city’s infamous wall ripped through this area but in the haste of the wall’s construction in 1961, a triangle of what was officially East Berlin was left on the western side of the wall. [click] Nobody could really use this 350 squared metre plot of land as the West German government didn’t own it, and the East German government couldn’t get to it so over the decades, this no man’s land was used by the local residents as a rubbish tip. That was until Osman moved in.

Very quickly, the recently retired Turk saw, not an unusable, politically divisive dump but a patch of land that could be tended, tilled and could one day teem with life. And so Osman worked from dawn to dusk most days to make his dream a reality.

He planted fruit trees and staple crops, devised a crude irrigation system and built a shed. In short, Osman and his family created a little patch of paradise out of dirt and detritus.

But midst of the chaos and conflict that literally overlooked the land, it is unsurprising to hear that he faced great challenges to his task. Just two weeks after he started digging up the garden, the East German border guards came to visit him to see what he was up to, and to make sure he wasn’t tunneling.

When they saw that he was simply starting a garden they allowed him to use the land, providing that he remained 3 metres from the wall.

Soon after that visit, the West Berlin police approached him, demanding that he move off the land. “No,” was Osman’s reply. “God gave me this land!”

The East Berlin guards watched this exchange and could see he was really annoying the West Berlin authorities – so to annoy them even more, they made sure that Osman had free and full use of the land.

As the years passed, the guards became used to his presence. Every morning it was part of his routine to wave to them in the watchtower, give them some of the garden’s produce and make them tea. In turn, each year the guards wrote him Christmas cards, and sometimes even gave him a bottle of red wine.

By November 1989, when the wall finally came down, Osman had become something of a local hero, an eccentric old man known for going against governments, doing what he felt God called him to do and getting away with it so that when the council tried to evict him from the land, the local community and significantly, the church overlooking the garden, protested and argued in favour of the garden remaining with Osman…which it did. And although he’s now tending a different piece of paradise in the world to come, his Earthly garden remains in Berlin to this day, with Mehmet, Osman’s son and Funda, his granddaughter, tending to it.

Incredible, hope-filled and unique as that story might sound, we see it mirrored in the work of the Syrian family I talked about in August who have taken some forgotten, fly-tipped allotments in Treforest and have turned them into a living Eden…and both of these living stories are echoed in our scripture story of today…that of Jeremiah and the plot of land.

If you managed not to get distracted by all those Old Testament names…you would have heard that Jeremiah, like Osman, found himself living in a city of conflict and ever-impending violence. The Babylonian armies encircled Jerusalem; Jeremiah himself had warned of invasion, enslavement and exile and was imprisoned as a traitor for so doing; and yet, in the midst of this chaos, he purchases a plot of land, explaining to others that God has asked him to do so!

For so says the God of Israel: Houses and fields and vineyards shall again be bought in this land.

What was happening here, then? What was the point that Jeremiah was trying to embody in his bizarre action? In a word…hope. Jeremiah, more often known as ‘the weeping prophet’ for his doom and gloom words in desperate times is here prompted by God to offer his contemporaries a word of hope. In his day, land could mean the difference between life and death and the promise of a time beyond their present crisis when Israel would once again buy homes and vineyards in the promised land was a declaration that God had not forgotten them…that God was with them in their trials and would bless them once again in their future.

Such hope isn’t naïve optimism, an emotional crutch or an excuse to do nothing. Far from it…Jeremiah’s hope led him to prophetic action, buying that plot of land in the face of an invading army. Hope, then, isn’t then something futile, feeble or fickle. Hope is wild, alive and based upon the goodness of God. Hope always leads to action. As Augustine, the African theologian and early church leader is reported to have said;

“Hope has two beautiful daughters…their names are Anger and Courage. Anger at the way things are and Courage to see that they don’t remain as they are.”

And it did…for both Jeremiah and Osman’s descendants built homes, planted gardens and tended vineyards long after divisive walls had fallen, lands were reunited and exiles returned home.

Perhaps then, as people of God, we might look to the past, remember God’s promises and hold on to hope. Perhaps, as a church, we too might look to protests and purchases of land as inspiration of prophetic action that we might take today. 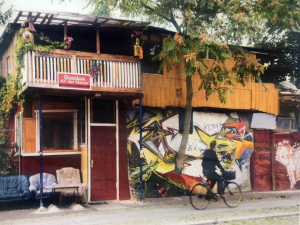 Or perhaps we might look again at Osman’s peace garden and the tree that stands tall at the entrance to it…for it is roots are deep, its branches are strong, its shade is cool and its species is called ‘ailanthus’ or ‘Gӧtterbaum’…God’s tree. Amen.