“I see trees of green, red roses too…’

So, in the beginning, God made trees! Okay, I know they weren’t strictly the first things that God makes in the poetic accounts of creation we have but they’re pretty darn close. Whether you go for the day-by-day approach of chapter 1 or prefer journeying with Adam and Eve from chapter 2, trees have a starring role in creation’s origin story…just as they do in those stirring closing scenes in the Book of Revelation. One could even argue that the whole Biblical account of time and space occurs between two trees…which aren’t just pretty bookends to the real action but significant players within it. Think about, from the first page of The Bible to the last, trees are sown throughout our scriptures. So if you’ve got paper and pen at the ready – and even if you haven’t – here’s a challenge for you. I’ll give you 30 seconds to name aloud or simply think of as many Bible stories as you can in which trees figure. Your time starts…now.

How many did you get? Two or three? Eight to ten? More?! I wonder which ones came up most…the two from this morning’s readings, presumably; maybe Noah and the olive branch; God’s promise to Abraham by the oaks; Zacchaeus and the sycamore tree? Or maybe you went for something a little more obscure….cedars and acacias in Isaiah or the fig-trees and mustard trees of Jesus’s teaching. Well, however and whichever species you name-checked, it’s clear that trees figure prominently in God’s love-story with creation. After God and human beings, they’re the third most mentioned thing in the Bible. Which can give a tree big ideas!

In fact, I once heard about three little trees who stood on a mountain top and dreamed of what they wanted to become when they grew up…

The first little tree looked up at the stars and said: “I want to hold treasure. I want to be covered with gold and filled with precious stones. I’ll be the most beautiful treasure chest in the world!”

The second little tree looked out at the small stream trickling by on its way to the ocean. “I want to be traveling mighty waters and carrying powerful kings. I’ll be the strongest ship in the world!”

The third little tree looked down into the valley below where busy men and women worked in a busy town. “I don’t want to leave the mountain top at all. I want to grow so tall that when people stop to look at me, they’ll raise their eyes to heaven and think of God. I will be the tallest tree in the world.”

Well, years passed – as they tend to. The rain came, the sun shone, and the little trees grew tall. Then, one day three woodcutters climbed the mountain.

The first woodcutter looked at the first tree and said, “This tree is beautiful. It is perfect for me.” With a swoop of his shining axe, the first tree fell.

“Now I shall be made into a beautiful chest. I shall hold wonderful treasure!” the first tree said.

“Now I shall sail mighty waters!” thought the second tree. “I shall be a strong ship for mighty kings!”

The third tree felt her heart sink when the last woodcutter looked her way. She stood straight and tall and pointed bravely to heaven. But the woodcutter never even looked up. “Any kind of tree will do for me,” he muttered. With a swoop of his shining axe, the third tree fell.

The first tree rejoiced when the woodcutter brought her to a carpenter’s shop. But the carpenter fashioned the tree into a feedbox for animals.

The once beautiful tree was not covered with gold, nor with treasure. She was coated with sawdust and filled with hay for hungry farm animals.

The second tree smiled when the woodcutter took her to a shipyard…but no mighty sailing ship was made that day. Instead, the once strong tree was hammered and sawed into a simple fishing boat. She was too small and too weak to sail on an ocean, or even a river; instead, she was taken to a little lake.

The third tree was confused when the woodcutter cut her into strong beams and left her in a lumberyard.

“What happened?” the once tall tree wondered. “All I ever wanted was to stay on the mountain top and point to God…”

The three trees grew despondent and nearly forgot their dreams.

But then, one otherwise ordinary night, silver starlight poured over the first tree as a young woman placed her new-born baby in the feedbox.

“I wish I could make a cradle for him,” her husband whispered.

The mother squeezed his hand and smiled as the starlight shone on the smooth and the sturdy wood. “This manger is beautiful,” she said.

And suddenly the first tree knew he was holding the greatest treasure in the world.

A few years later, a tired traveller and his friends crowded into the old fishing boat. The traveller fell asleep as the second tree quietly sailed out into the lake.

Soon a thundering and thrashing storm arose. The little tree shuddered. She knew she did not have the strength to carry so many passengers safely through with the wind and the rain.

The tired man awakened. He stood up, stretched out his hand, and said, “Peace.” The storm stopped as quickly as it had begun.

And suddenly the second tree knew he was carrying the king of heaven and earth.

Not long after that, on a Friday morning the third tree was startled when her beams were yanked from the forgotten woodpile. She flinched as she was carried through an angry jeering crowd. She shuddered when soldiers nailed a man’s hands to her.

She felt ugly and harsh and cruel.

But on Sunday morning, when the sun rose and the earth trembled with joy beneath her, the third tree knew that God’s love had changed everything. It had made the third tree strong. And every time people thought of the third tree, they would think of despair turned to hope; of resurrection, new life and God’s extravagant love. That was better than being the tallest tree in the world!

A tale there that reminds us of the role that trees played in the greatest story ever told. The good news of the God who so loved creation that He gave His one and only son so that everyone who believes in Him shall not perish but have eternal life. And whilst some Christians think this was God’s Plan B – a cosmic tippexing out and writing over – I think it was more a radical revelation of the message that God was telling us from the very beginning. The tale of divine love, grace and beauty that was woven into the very fabric of creation. The apostle Paul says the same thing in his letter to the Romans (1:20), so I can’t be going too heretical here, and just look back at those verses we heard from Genesis. Adam’s new home was rich with trees – some that would give him and Eve fruit to live on, for sure, but others that were ‘simply pleasing to the eye’. Trees that were just beautiful to be around!

During lockdown and the subsequent restrictions we’ve faced, many of us have enjoyed our surroundings more than ever. Just like Adam, many of us have had the chance to breathe in God’s spirit and appreciate the trees all around us that are pleasing to the sight. Perhaps even, like Jacob after his vision of the ladder, we have finally woken up from our sleep and thought ‘Surely the Lord is in this place and I was not aware of it’ (Genesis 28:16).

You see, the truth is that all creation – everything visible – is the outpouring of God.

‘Earth’s crammed with heaven’, the English poet Elizabeth Barrett Browning declares, “And every common bush afire with God; But only he who sees, takes off his shoes. The rest sit round it and pluck blackberries’. Now whilst I might want to suggest to Elizabeth that picking blackberries and seeing heaven all around us are certainly not mutually exclusive, I think her point still stands. So as we kick off a 4-week reflection on creation, with faith groups across the world, we begin by thanking God for the sheer beauty of it. The sheer gift of it. For being placed in a home with trees which provide food and drink, medicine and oxygen…but also for trees which are simply beautiful to look at. Trees which rustle with whispers of God’s grace. And, as Franciscan theologian Richard Rohr puts it – 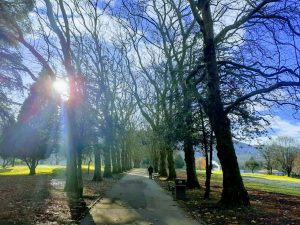 ‘Once we know that the entire physical world around us, all of creation, is both the hiding place and the revelation place for God, this world becomes home, safe, enchanted, offering grace to any who look deeply.”

This season of creation and beyond, let’s look deeply at God’s grace-soaked creation all around us. Let’s thank God for oaks and olives; sycamore and fig-trees, for cedars, spindle and spruce. Let’s praise God for the wonders of our woodland home and heed the call to delight in it. Amen. 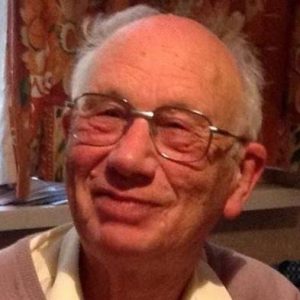 ‘Abram passed through the land of Canaan to the holy place at Shechem, to the sacred oak of Moreh….Then God appeared to Abram’.
(Genesis 12:6 NRSV)

Living God, present everywhere, we ask that you will help us to be aware of you, and to relate to you in our own way, as Abraham did. We ask that like him we may respect those who have beliefs and practices different from our own. That we may learn from them, see in them your light and truth, and hope that they may see something of your light and truth in us. We pray for all those persecuted, despised and disadvantaged because of their religion, including those who have no religion. May all share the light they have to the advantage of all.

The bay leaf, a pleasant herb in cooking comes from a very fast growing tree, and reproduces widely. It reminds us, like the ancient poet, of the prevalence of evil and its spread in the world.

Creator God, let us remember that evil rulers eventually fall. Help all those who are active for justice and peace to make progress despite the powers set against them. Help those who are trying to ensure the survival of the planet while others pollute and destroy. Encourage those who, when others set forests on fire, plant trees. May we present your world back to you in all its beauty and loveliness.

‘….Zacchaeus was superintendent of taxes and very rich……….he ran on ahead and climbed a sycamore tree in order to see Jesus.’

Compassionate, empathetic God, some hearts are breaking today. Draw near to them. Some are in pain, physical or mental. Soothe their pain. Some are confined to home or nursing home bed in great weakness. Be more to them than strength. Some are dying. facing the darkness, facing the unknown. Lead them to your Paradise garden and to everlasting life.

In the name of Jesus, the Gardener. Amen.