Driving through the streets of Pontypridd last Saturday night at about 10 pm a youngster was  vomiting  on the pavement. Its  not an uncommon sight. Overindulgence in alcohol is the number one cause of social problems on our streets, from minor health ‘repercussions’ of this kind to more serious accidents, verbal and physical abuse.
From 10pm this Saturday night, and every Saturday thereafter, help will be at  hand  for those who want or need it.   Twenty two newly trained Street Pastors were commissioned at a special service at Temple Baptist Church.
All have undergone  an extensive training programme over recent months, including awareness of drugs and alcohol  and how to respond to people in different situations of need. All of them are members of local churches, and all have committed to  be out on the streets on duty at least once a month.
Street pastors is a national scheme run by the Ascension Trust. It began in London in 2003 and since then about 9000  volunteers have been trained around the UK,   A reduction in crime has been shown to  result in areas where  street pastor teams are working. 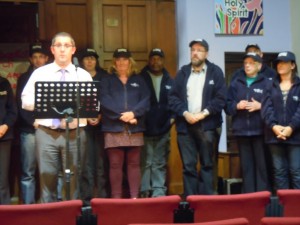 Mark Thomas, of the Ascension Trust, reminded those being commissioned of their three watchwords “Listen, care and help”.    According to  the local police representative present, this is “what the police don’t do!”   (which  I take to mean that they don’t have time to do!).   The police and the local authority  have been enthusiastic and co-operative supporters of the scheme in Pontypridd. They recognise what a human, caring  presence  on the streets can accomplish, which the statutory authorities are unable to do. 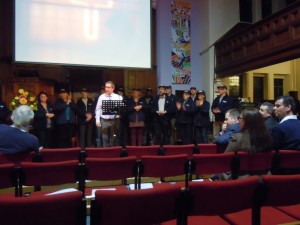 Mark spoke about the challenge in Micah 6 v 8 about what God requires of us: to act justly, love mercy (or kindness) and to walk humbly with God.    This  is what street pastors are called to do. It is what Christians are to do, and, he suggests,  is it not a  ‘requirement’ for all human beings?

The congregation looks sparse in the picture – not because the occasion was poorly attended. Rather because by this stage there were so many people on the stage! In addition to the street pastors, volunteers have committed to be prayer partners,  to remain at ‘base camp’ and to uphold in prayer  those who are out walking the streets.

May God be with them all!