Elinor  will be living in a Christian Community in West London next year, during her university studies. She attended  a special fortnight in Glasgow to prepare for the experience. 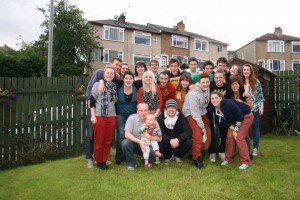 Over the past year of studying in London, I have been involved in a Christian community called Koinonia (“community” in Greek). Koinonia is one in a global network of University Christian Outreaches. Each outreach is associated with all-age Christian communities which make up the Sword of the Spirit movement. Kairos is the name given to all youth programmes (under 25’s) within this movement, and is therefore the umberella under which Koinonia comes. This specific programme – Summer Mission Households – was for a fortnight, hosted by the Community ofthe Risen Christ in Glasgow.
Service
The focus of Summer Mission Households (SMH) was service. We had sessions where we listened about being servant-hearted; about the importance of letting people serve you, as well as offering to serve yourself; about taking joy in serving, and realising how each little thing no matter how dull it may seem at the time, is working for God’s kingdom. In this spirit we threw ourselves into the service projects to which we were allocated. One (which I didn’t see first hand) was Clay Church. I believe this was set up by one man who basically gathers groups together and goes to more run down or abandoned areas of Glasgow to do ‘guerrilla gardening’ i.e. mass weeding and planting of pulbic spaces, but without the  permission of the authorities!
The project I was most involved with was Missionaries of Charity – a kids’ club run for three weeks during the summer holidays by a group of nuns stemming from the movement of sisters established by Mother Teresa. We spent 3 hours a day with them playing games, singing songs, doing crafts and skits and one outing to the park.
Other projects were at the Preshal Centre and Bellisle Street. Bellisle Street is the location of our host community’s offices, where we did some painting, cleaning and re-arranging of rooms. The Preshal Centre is a homeless shelter providing a place for sharing experiences and building friendships. We were there primarily to serve and clear lunch, but also ended up leading a little sing-a-long, participating in a snooker tournament, and chatting and hearing their stories which really moved some of us.
Households
Another major focus of the fortnight was a series of training sessions, working through a ‘household manual’. Households are a common thing throughout the Sword of the Spirit communities. They’re single sex houses, teaching the importance of compromise and the beauty of common living. All expenses are shared including the buying of food, spending evenings doing house activities to get to know each other are encouraged, and it’s important to have the house available for events and visitors. It’s also a great way to give insight into Christian life to those who perhaps aren’t so familiar with it. Of course, each house varies depending on those living there. It is up to the residents how to organise the daily morning prayer, and who has which role within the house e.g. treasurer, events co-ordinator, shopper, etc.
Drawing on how  our experience of living during this fortnight, the training sessions looked at how recommendations in the ‘manual’  help us to explore our faith deeper and live with God as the centre. I am going into a household based on this model in London in September for the year.
Getting to know the community
Alongside all of this, we had split men’s and women’s sessions, ‘Lord’s Days’ and a few freer, more relaxed, retreat days. Lord’s Day is a weekly occurrence within Sword of the Spirit communities. As the communities are ecumenical, and people are encouraged to worship within their own Church traditions on a Sunday, this is celebrated on Saturday evenings and consists of communion and dinner.
We will forever be grateful to the hospitality of the Glasgow community! We were spread between 3 houses (2 houses of 5 girls, one of 11 guys). Two of these were houses that belonged to members of the community, given for our use over the fortnight. We were hosted by a few families for dinners. Many gave us lifts to and from sessions as one household was a bus ride away from the majority of the community residences. Some of the community’s youth were even helping out with the Missionaries of Charity kids’ club. We had some talking to us – as part of the retreat day, in a session on service, and most notably in the ‘Slice of Life’ sessions where different people were invited to each house to share their testimonies. It was incredibly inspiring to hear how people had retained their faith and trust in God throughout life’s trials!
Elinor Rhys