The theme for the week was       READY STEADY GO!
Loosely connected to the Olympic Games.

There was a different theme each day but they were linked. 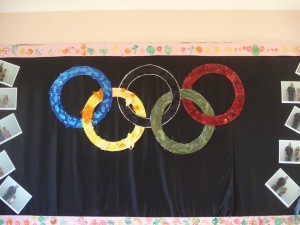 Each day we had a white Olympic Ring to decorate, a story to listen to, a song to sing, an activity to do and several games to play. 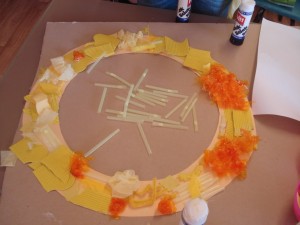 Monday’s theme – Light of the World
The story was the healing of the Blind man….
The ring was decorated with different textures in Yellow,
A game – we threw bean bags through a hoop which had bells hanging from it and had to make the bells ring – but we were blind folded.
We also had a special visitor – one of the Olympic torch bearers. Philip Richards,
Everyone had their photograph taken holding the torch, and we learnt many interesting facts about it and about the people nominated to carry it. 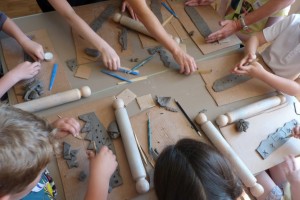 Other activities included decorated fish shaped biscuits linking to the story of the ‘great catch of fish’.The ring that day was decorated with blue fish.

Another day we had the story of the 2 people walking to Emmaus and Jesus joining them, but not being recognised until he shared a meal with them and blessed the bread. This ring colour that day was black as they were sad.
The game was the ‘bubble wrap road’ – we had to walk over bubble wrap without popping the bubbles – representing walking slowly because they were sad, but after realising that Jesus was alive, they ran back to Jerusalem – so they were able to run over the bubble wrap and burst as many bubble as possible. All of the children said: ‘That was cool’ – can we do it again?

The day when Pentecost was the theme we had a red ring and sang ‘Go tell everyone’ –  The activity was pulling together as rowing teams when we designed and made canoes and oars to race against each other.  Very competitive and noisy when they were raced.

Another day edible Olympic torches were made using cones and sponge cakes decorated with yellow butter cream. Mmmmmm!
We have had a great time, learning and playing together. Looking forward to next year!
Marcia Hurley