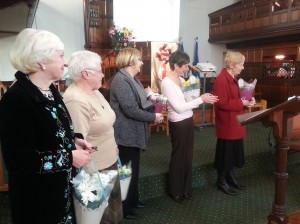 At our Church Anniversary service on 18th January we celebrated 42 years of Sunday Club at Church House, and expressed our thanks to the current staff team: Marilyn (L), Jan, Lynda, Marilyn (E) and Heather.
Marilyn Leach spoke about the journey of Sunday Club over that time:

‘The Rev Harris Hughes, at the beginning of the 1970s, saw that Graigwen was developing, with more and more houses being built. He decided that there was a need for a church of some kind to be built there.

Initially there was a leaflet drop asking for volunteers and if there was a pianist available. So I put forward myself, as did Jan Bayliss. I remember taking our little three year old boys for a walk to see how the building was getting along. It was quite rough walking down the unmade road. At that time everyone travelled up and down the hill as there was no road through from Mayfield.
As we opened in 1973, M Hughes begged and borrowed furniture so that we did have a few chairs and tables. We started with just a handful of children. More young families settled in the area and so our numbers started to grow. The boon years were from the late 70s to the mid ‘80s. Our numbers were close to a hundred. We asked parents if they were able to help us and that’s how Alma Jones and Susan Thomas joined us and then Lynda, Heather and Maralyn Edwards. It was quite difficult, accommodating all those children – and this was before the extension was built which we now know as the worship room.

Parties were a marathon affair, and always held after Christmas. Because of the numbers we held two parties; one for the infants followed by another for the juniors. It was a 12 noon to 10pm day. But we had a lot of fun and the parents were unfailing in their support. We always asked the children to bring a small plate of food. One year we were inundated with sausage rolls – hundreds of them. In the end, one of our teachers took a lot of them home for her dog!

Once a year, a celebratory service was held in the evening. We were invited to contribute. We practised really hard and every child made a musical instrument. Our ‘slot’ did not go very well. One of our children, a mischievous lad who shall be nameless and who still lives in Pontypridd, shook his maraca so violently during the singing that the dried peas flew everywhere. As a consequence a lot of the children abandoned the singing and scrabbled on the floor looking for the peas! It was a disaster.

On one occasion we were invited to join St David’s Christmas party in Ponty. We were asked to sit on the floor to watch a film. Unfortunately the film didn’t hold the children’s attention very well. We thought we were having cartoons but instead we had a film of the coronation! The same little boy mentioned before got very restless. He left the sitting group and unseen, he went exploring. He pulled back window curtains and the next moment tens of balloons were let free – chaos ensued.

We had a visitor most Sunday mornings – and really I think we could have put his name on our register. He was four –legged and his name was Mac. Uncannily he knew when it was a Sunday and at 12 o’clock he was waiting at Church House door. He was very loyal and if we held events mid- week, he’d turn up. I remember once, when we were having a Bring and Buy, he must have slunk in and Mrs Harris Hughes exclaiming “Is that a dog under that table?”

Our Sunday school trips were very well supported – two buses always, but always something went wrong with them : breakdowns sun roof blowing off and rolling along on the road behind us. But everyone seemed to have the Dunkirk spirit and we shouldered all these mishaps.

And so looking back over the 42 years that we have held Sunday Club, we’ve welcomed children of our children and the friendships we have made are lasting.
Finally we hope that the morality of the Christian way of life will have shaped all those children who have passed through our doors.’