In June, Elinor  was elected,  the youngest ever trustee/company director (18 years of age at the time) of the Council for World Mission. Both the Presbyterian Church of Wales and the United Reformed Church are member denominations of CWM. Previous blogs (in August 2011) have described the CWM European Region family conference ‘Window on the World’ which latterly has been held in Llangrannog, Wales.

Elinor was invited to represent the PCW at this years World Assembly. This is her story…

The Journey
I flew on the 11th of June, meeting some fellow youth at Heathrow airport for the first time. Each of us were representing a different denomination – I was there with the Presbyterian Church of Wales. None of us knew what to expect, and were hoping that we’d remembered to pack everything. The journey itself was quite an adventure, flying first to Los Angeles for an overnight stay, then on to Hawaii, before landing in Pago Pago, American Samoa’s capital – a total of 22 hours in the air. It was great seeing welcome banners for the Council for WorldMission (CWM) General Assembly 2012 along with some local villagers and a camera crew! The assembly was hosted by the Congregational Christian Church ofAmerican Samoa (CCCAS) a Kanana Fou Theological Seminary. 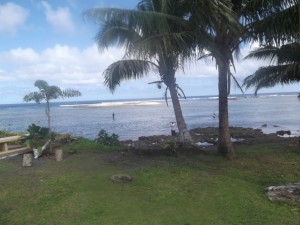 American Samoa (not to be confused with the independent state of Western Samoa) takes up only about 76 square miles in the middle of the Pacific Ocean, small enough to have only one post code! The island is an “unincorporated territory” of the U.S. meaning that residents have free and unrestricted entry into the U.S. but are not citizens and therefore may not vote in U.S. presidential elections. There is a curious co-existence of cultures – the prominent American fast food industry, and the traditional Samoan rituals, craftsmanship and structures, especially on village levels where “matai” (chiefs) are elected by consensus. Fun fact: there are two McDonald’s on the island, one of which is the only McDonald’s in the world to ever run out of food!

Youth Pre-Assembly
Our programme started with a Youth Pre-Assembly, a new addition to the CWM General Assembly, consisting of 30 ‘youth’ representatives from the 31 member churches of CWM (unfortunately Malawi’s representatives could not make it). I was there on behalf of the Presbyterian Church of Wales.
We spent most of this time reflecting on the theme of the assembly – “Hope: the language of life” – and were all pleasantly surprised at the similarities we found in our visions of “hope”, despite regional and denominational differences in other areas. The sharing of current hopes in our regions were also invaluable. From this, we drafted regional statements on what “hope” meant for us, and composed a statement as youth representatives, later to be presented to the whole Assembly. We worked incredibly hard on this, working till 12-4am most nights. This required ensuring that everyone understood and agreed with what we were writing, especially as it was a minority of us who regarded English as our first language. It enstilled a discipline in us to slow down our speech and keep checking that everyone was following.
[For a copy of the final statement, please contact me]
Experiencing The Island
An obvious highlight of our stay was the weekend of June 16th-17th,  which was set aside for ‘exposure trips’ around this beautiful island. All 150 or so staff and delegates (an average of 3-4 from each of the 31 denominations) were transported to 3 different villages on the Saturday. Each village laid on food and drink for us, and the local youth groups performed – a huge part of American Samoan life – many using contemporary pop music with Samoan lyrics written with a Christian meaning. One of these villages was Leone. This was the village worst hit by the tsunami of 2009, with 10 fatalities and many buildings demolished or damaged. In it’s beautiful bay, John Williams of the London Missionary Society landed and built the island’s first church in the late 1830s. The population is now estimated as 98% Christian.
On the Sunday, we travelled in groups of 3 or 4 to various CCCAS congregations around the island and contributed to their services in whatever way we were asked to. Here we truly experienced the extreme generosity of American Samoan people. Each of us were fed generously, were presented with gifts (which many of us boxed up and posted home,  as there was no room on our luggage!) and we were treated with the highest respect. It was quite strange being treated in such a manner, but incredibly humbling.
The Election Process
The assembly got into full swing, with the main agenda being the elections. But, we also enjoyed talks from the keynote speaker, Allan Boesak and our bible study leader, Chris Ferguson along with afternoon workshops. All  related to the assembly theme, and the idea of fighting against oppressive empires was prominent. Unfortunately we, as youth representatives, had to pull ourselves out of many of these sessions due to difficulties and restrictions arising regarding our duty to put forward two youth delegates for seats on the Executive Council. After much discussion, tears, frustration and prayer, we put forward the only names available to us, contrary to the new structure’s intention. However, we addressed the assembly with this issue, and we hope that raising it is the first of many steps towards a more equal and less constricting election system.
[If anyone would like a copy of this address, or  for more details, please contact me or watch the video]
Coconut Theology
An obviously integral component of American Samoan life is the coconut. Throughout the Pacific, in fact, the tree and fruit are used for building, cooking, drinking, craft-making and even as soap. In our closing worship, we experienced a Coconut Communion and coconut theology was explained to us:
The hard outer shell – the “providence of God”, protecting and cocooning us
The flesh of the coconut – the “body of Christ” broken for us
The coconut water/juice – the “blood of Christ” shed for us
The kernal/ o’o – the Holy Spirit
Finally, for new life to emerge from the coconut, the seed must first die to create life. 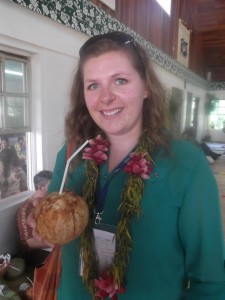 The Council at work
A new council has been elected, and  I  was elected as the representative for the Presbyterian Church of Wales for the next 4 years. My first meeting was 5 days after landing home from American Samoa (not including the meeting at the end of the General Assembly), and the next meetings are coming up in October – one in Cardiff and the other in Singapore. Prayers would be appreciated on balancing this committment with my studies and everything else.
Elinor Rhys