Four weeks today, I’m due to visit the little town of Bethlehem as part of the training for leading a pilgrimage out there next April. Aware that Israeli customs officials aren’t always the most relaxed of folks, I realized that my old passport, recently put in a mixwash, might not aid a smooth transit so along to the post office I trudged to pick up the forms for a new one. Complications of photos and countersignataries followed and were then sorted before I had to phone my Dad to check a few facts of which I wasn’t 100% certain. I felt a slight pang of guilt as I had to confirm my Mum’s place and date of birth but it was actually my Dad’s details which I’d got wrong. Date of birth – 6th May 1945 – 2 days before VE Day; place of birth – London. Generic London.

“But I thought you were born in Minehead,” I said to him, recalling the story of his birth that he’d told me a number of times before.

“I was,” he answered. “But they wrote London on the birth certificate.”

I was a little surprised by this but it wasn’t totally confusing. You see, in 1945 my grandparents were living in South London which wasn’t exactly the safest place for a pregnant woman and her soon to be born child so they joined the throng of evacuees who made their way west, finding lodging in Minehead, where my Dad was born and spent the first year of his life. Then, somewhere along the way, those at the records office needed a place of birth for his forms and ‘London’ was written down. So my Dad’s birth story is one of love and war, falling bombs and crashing waves, parted parents and inaccurate documentation.

I wonder what your birth story is. Perhaps, like my Dad’s, it included threat and fear or took place a long way from home. Perhaps, like mine, it’s one of doting parents, warmth, shelter and a home full of love. Or perhaps it’s one of surprise and scandal, like my maternal grandad who found out late in life that he was born just three months after his parents tied the knot.

Whether known well or somewhat sketchy, we each have a birth story and tonight we recall the most famous one of all. Some of it may be similar to our own – the sweat on the mother’s brow, the groaning of a body in pain, the relief of a baby’s cry. Some of it will sound wildly different – the angelic choir, the magi from the East, the squalor of the birthplace. It’s easy to slip into a Christmas coma when hearing Jesus’ birth story. It’s tempting to get side-tracked by the tinsel and tea towels of the school nativity play, or to be seduced by the apparent adventure and romance of it all and images like this one 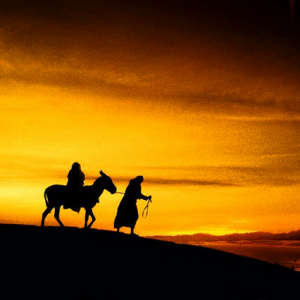 don’t always help. Just a fortnight ago, Simon asked me why did I think all the images of Mary and Joseph travelling to Bethlehem depict them on their own when they wouldn’t have been; when actually, many others would have been journeying along the same road in a picture as common for those of their day as a couple driving along the A470 would be for us today. Even the place of Jesus’ birth might seem wild to our modern, western minds but a birth in a barn or cave wouldn’t have been anything to write home about in first century Palestine, nor is it across much of the world today. It was just an ordinary stable with ordinary stable sounds!

The extraordinary part of the story we’ve read, heard and sung again this night really isn’t the setting at all – but the belief that somehow into this very ordinary and very normal human setting it was God who was coming, God who was being born.

To the shepherds and wise men, to Mary and Joseph, the priests and everyone of their day, such a thought would have seemed like madness…and blasphemy, to boot! No Roman or Greek could conceive of the gods and humans being anything other than separate and, as we heard earlier in that rather bizarre passage from the book of Exodus, the Jews went to great lengths to show that no one, not even the great prophet Moses, could look upon the face of God and live. God was holy – separate, distinct, totally other and we lowly humans had little right to be in God’s presence so, like all good religions, rules were made to ensure that God could only be approached at a set apart time of the year by a set apart gender of set apart priests who followed set apart rules and protected the set apart Temple. If you were female or differently abled, from a different nation or faith, gay or transgender, too young, too poor or simply not born into the right family, you were to keep your distance from God for you were deemed unworthy and unclean.

Then, on an otherwise ordinary night in Bethlehem, God was born in an everyday, unclean stable.

When we had decided that God was separate from creation and found in a set apart, sacred places, Jesus came along – surrendering the set-apartness of God to be born, live, die and rise in our midst. When we had defined and confined holiness to set apart people, times and places, God in Christ had extended it to all. God became human, took our flesh, so making us holy and revealing the inherent worth and value of all who share that flesh.

Today, in a world in which women are often mistreated by men; where the world’s richest nations turn their backs on those whose lives have been destroyed by war; where political and religious leaders use fear and hate to encourage suspicion of the stranger and distrust of anyone who doesn’t look, sound and act like one of the set apart elect, perhaps retelling the Christmas story is more important than ever as in doing so we are reminded that each of us – every single person here this night and every single person beyond these walls has value and purpose and is extravagantly loved by God; that all human beings are holy and should be treated as such – the hungry children of Yemen, the homeless on our streets, those on both sides of the wall in modern day Bethlehem, those of every ethnicity, gender, sexuality, religion and position on Brexit. All of us. Each of us – created by God, known by God, embraced by God.

Perhaps this is what we need to hear once again in the stillness of this night. That each person we meet, see, listen to, love and struggle to love is a sister or brother of the Christ-child, is a beloved daughter or son of God. Or perhaps you need to be reminded that you – even you with all your worries and cares, hopes and fears, doubts and missteps – even you, are deeply, deeply loved, forgiven and encouraged to shine as bright as you can; for whether we were born in Bethlehem or Bedlinog; Minehead or Maesycoed; whether our parents enjoyed a long term relationship or brief encounter; whether our arrival was met with joy or scandal, we share in a birth story of love. It’s the story of a God who screwed in the stars, filled up the seas, plumped up the mountains and breathed life into every person who has ever been, and will ever be, born. It’s the story of a God who chose not to be separate, other, out there but came to get involved in the mess and magnificence of our lives. It’s the story of a God who was born one night in Bethlehem; who was held in the strong arms of a carpenter, who brought gruff shepherds to tears, whose mother gave him a peck on the cheek and unknowingly kissed the face of God. Amen.