Over the weekend of 13-14th May, St David’s Uniting Church collaborated with the ‘Christian Voices Coming Out’ project by hosting its powerful exhibition which documents the work of pioneering LGBT Christian activists, advocates and allies over the past 40 years – individuals who have worked for the acceptance, affirmation and welcome of gay and lesbian people within the Church.

As part of our hosting of the exhibition, this month our ‘film and chat afternoon’ saw us watch our first documentary – the award-winning ‘For the Bible Tells Me So’. The film moved many people to tears and it told the stories of five Christian families who reacted in very different ways when they found out that one of the children was gay. Whilst a tough watch, it was also a hopeful film in its message that engaging in dialogue with the gay community and in greater Biblical study can lead to hearts and minds being changed and, perhaps in time, the full acceptance of our LGBTQ sisters and brothers into the Church.

Following the film – and a much needed tea break! – as an elder, friend and retired Baptist minister, Ray shared a few reflections about why he had arranged for the exhibition to be brought to St. David’s Uniting Church. His honesty and generosity in speaking about his own journey in realizing he was gay and how that had brought both challenges and blessings to his life and walk with God were a wonder to witness. We were all challenged to reflect on what we might do to fully live up to our commitment to be an open and affirming church as a whole range of issues were discussed.

After all of this, thanks were given to Ray – for all he is and all that he shares with the church – as we assured him that we love him for who he is. A Ray-nbow cake was then presented and devoured before the exhibition was packed up, ready to make its way to South Wales University Chaplaincy where it will engage and educate students all this week. 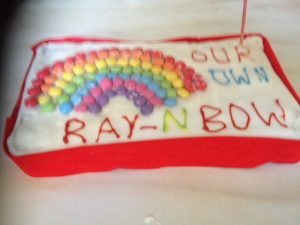 Here is Ray’s reflection on the evening:

A huge “thank you” to all of you who were there on Sunday afternoon when Phil interviewed me about my experience and thoughts as a gay man. As I said then, I am immensely thankful to belong to this church – and the surprise cake that appeared at the end was a fitting sign of that “extravagant love” that we are always hearing about at St David’s!

One of the issues raised was that of moral principles. Putting it simply (perhaps too simply): if it’s OK to be gay, what is not OK? I think this is a very important question. In the past (and in many Christian circles still) the teaching has been that lovemaking between people of the same gender is simply wrong. Many gay and lesbian people have reacted to this blanket condemnation by thinking: if I’m going to hell anyway, what’s the point of having any moral principles at all? This has contributed to the unrestricted hedonism, selfishness and cynicism that is often seen in the gay world.

Its background is a legalistic religion that thinks only in terms of commandments and punishment. But the real Gospel is not about this at all. It is about God’s unconditional and infinitely generous love. The only real “commandment” is to love one another. The way we treat one another is to be motivated not by obedience to rules but by the genuine kind of love that treats people with respect and honesty and cares about them.

Legalism usually fails in its object. I have known gay Christians whose life is a pendulum that swings between irresponsible compulsive sex at one moment and agonies of guilt at the next. For those who feel truly loved by God as they are, the guide to their behaviour is respect and concern for others. Friendship is more important and far more satisfying than the mere satisfaction of physical urges.

This doesn’t necessarily mean than sexual intimacy is only permissible within a lifelong one-to-one relationship: that too is a “law”. We have to work out our morality according to the circumstances in which we find ourselves, but the motivation should always be love.

Love recognises people as they are: gay, straight, bisexual, male, female, uncertain, or not yet ready for sex. We all need the courage to be ourselves, and with love we can help each other to find ourselves and resist the pressure to be what we are not. It would be good if every church was a place where these things could be talked about freely and lovingly.