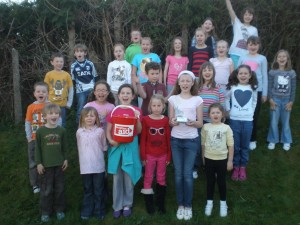 So it’s now just eight months since I trundled across the Severn, got ordained and began my journey alongside my sisters and brothers in South Wales. But boy does it feel longer. And I think that’s a good thing, for it means that I quickly felt welcomed here, soon felt at home. Though, of course, the transition from student to minister has not gone without its wear and tear on me. The bags under my eyes have deepened, the wrinkles increased and the hair on my head is thinning out whilst new hair is growing in all kinds of unwanted places! So as I began to accept the passing of my youth, I was overjoyed to read the words of 1 John in which the author addresses his readers as ‘children’ or ‘little children’ on twelve occasions. And by all accounts the words ‘little children’ became a bit of a catchphrase of John’s. St Jerome tells us that when John was old and fragile he would ask to be taken to the church in Ephesus and would muster the energy to say – “Little children, love one another”.

Whether actually written by John or by others in his community, the book known as 1 John was not written as an epistle – it does not begin or end with a salutation – but rather a sermon which addresses issues concerning the nature of Jesus, the ethics of Christian living and the question of salvation – issues which were causing disagreement and division within the early church. And the threat to the Christian community wasn’t only from inside the church but from outside too. Verse two of our passage tells us that the world did not know the Christian community because it did not know God.

And so what do we do about this? How might we be tempted to respond?

For some of us we are tempted to disappear from the world, to accept that the church is no longer to be listened to. And so some sections of the church advocate a sectarian calling – that we can still be who we are and do what we do but as a remnant, separate from, invisible to the rest of society. Our mission, some think, is to be the church and we do that by upholding the traditions, language and liturgies that mark who we are – by keeping the club going – and we can do all of this out of sight of the world’s attention.

For others, the temptation is to consider ourselves as special in a way that others are not – to react against an ambivalent world by affirming that we are holy and elect over and against others; that we are God’s favourites, and even though we do lip service to the idea that God loves everyone, that we are all equal in the eyes of God, our theology suggests that some are more equal than others!

Well, I want to suggest that tempting as these options may be, perhaps the words of John remind us of a third way; that perhaps it is in being sure of our identity as children of God that we might come to love God, ourselves, neighbours and enemies in radical and transformational ways.

“See what love the Father has given us, that we should be called children of God; and that is what we are.”

God the Father – the architect of the heavens and the earth; the author of creation – shows us God’s love in naming us and making us God’s daughters and sons. We may only be formed of dust. We might feel broken or worthless, unloved or unloveable but God says differently – God says that we are God’s children. Our hope in God is not simply some post-death, ethereal, unknown thing but is realized in the here and now. Is made real today as God says that we are God’s children – with our flaws and foibles; inadequacies and insecurities – we are the children of the living, loving God.

Such a belief does not mean that we are preferred over others; that we’re the special ones who God loves that little bit more. But in knowing who we are – in singing out our identity as children of God – we may awaken others to their identity in God too. This is our duty. This is our privilege.

So let’s take heed of John’s words, for in reminding ourselves that we are beloved children of God – in knowing that God formed us, lived and died for us, that God sustains, strengthens and re-forms us – we may delight in God’s love; we may rejoice in who we are; we may begin to transform this world in God’s name. Amen.